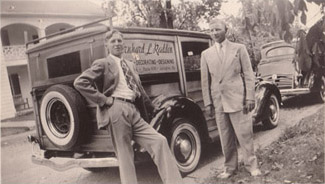 In 1934, Bernhard Ludwig Radden, the patriarch of the Radden company, set his goals on being Central Kentucky’s foremost painting and decorating contractor. In 1923, At the age of 17, having learned his trade in Germany under Otto Hilgenfeldt, Bernhard came to America from Hamburg, Germany. Bernhard moved from Lexington, Kentucky to Chicago, Illinois to hone his trade before moving back to Kentucky to start his own contracting company. Being an old world trained craftsman himself, B.L. Radden’s business was dedicated to quality workmanship and customer service. The firm was immediately successful, establishing solid customers among Lexington’s Main Street merchants, churches, horse farms and fine homes.

In 1954, his son, Tom, became a partner in the firm, and the company began a period of substantial growth as Central Kentucky’s economy expanded with new industry. Also during this time period, Tom Radden, Sr. was the creative force behind the opening of another division of the company - one of the original ‘decorating centers’, a new concept at that time. As a compliment to the already successful contracting business that Tom, Sr. and B.L. Radden had established, Radden Decorating Center featured exclusive wallcoverings, high-end paints, floor coverings, and decorating tools for the homeowner, contractors, and businesses. Radden Decorating Center also provided our contract customers a place to select paint colors and wallcoverings that the company would apply. B.L. Radden and Tom, Sr. along with the help of competent project managers over the years saw the company grow to be one of the largest and most respected of it’s kind in the state.

Representing the third generation of this family-owned business, Tom Radden, Jr., a University of Kentucky graduate, joined the firm in 1975, taking over the reigns of the Decorating Center, allowing Tom, Sr. to devote his time to the contracting division. In the years that followed, despite it’s popularity and loyal customers, the family decided to phase-out the Decorating Center in order to concentrate all their efforts on the contracting division. Since that time, the company’s operations have extended from central to eastern Kentucky, into southern Indiana and West Virginia. Tom Radden, Jr. is currently the President, while Tom, Sr. is still active in the firm as Chairman.

Continuing our heritage is B.L.’s great grandson, Patrick Alexander Radden. In 2009 “Alex” joined the team managing our warehouse, vehicle fleet, website and purchasing for 5 years before moving on to Estimating and Project Management. As Project Manager, Alex has overseen several of the Company’s most high profile projects including a new headquarters for the Valvoline Corporation, a new children’s hospital for Shriners and the upscale retail development, The Summit at Fritz Farm.

The Radden Company has always been on the frontier of trade technology and applied industrial and architectural coating systems, while maintaining our reputation and being capable of performing the most distinctive decorating schemes. From our commercial and industrial to residential customers, Radden’s professionalism, industry knowledge and expertise pervades each and every project.

While many other painting and decorating contractors have come and gone since 1934, we still strive to provide the same quality workmanship and service that would have made our founder, B.L. Radden, proud of the tradition he established.